Tech on the Net: Cooliris & RecordTV

Cooliris, until 26th July 2012, was a service that allows you to run a gallery of photos and images right from your browser. Cooliris has now repurposed the 3D wall technology that it has been offering to the desktop users to the mobile domain. They no longer offer the functionality through the browsers, except for Firefox 7 to 10 (the current Firefox version is 14). It is rather a shame that they decided the switch.

I tried the application on the iPad and it does have the 3D wall technology as its main feature. Currently, it accesses your Facebook and/or Instagram accounts for photos. However, what are lacking are the options to directly comment or like the photos. Instead, the user is brought to Facebook or Instagram websites in the Safari browser. This is rather lacking. However, I trust that such features will be included in the future releases of the application. 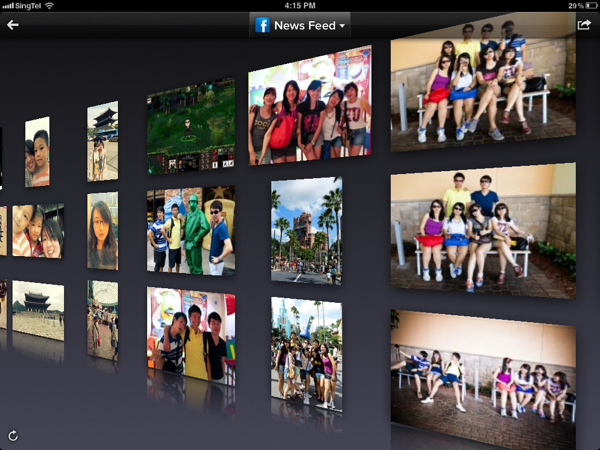 I assumed that RecordTV was long gone after that lengthy legal battle with Mediacorp. I tried using their services again when the Courts of Appeal ruled in RecordTV’s favour, thus overturning High Court’s rulings that RecordTV had infringed MediaCorp’s copyright in the free-to-air broadcasts and films. It was down, however, I should have tried to do so a few months later rather than immediately.

I received an email from them recently as part of their email blast to get current or old users to use their service again, which surprised me pleasantly. It is either I somehow missed previous emails or they are starting on proactively getting users back on the service.

Now, the user will have to use their Facebook account to log into RecordTV service. Upon logging in, the user is brought to rather minimalistic page that displays the channels and programmes that can be recorded and a playlists of saved recordings. Comparing the usability of the RecordTV with xinmsn, RecordTV’s interface beats xinmsn’s Catch-Up TV hands down.

In rooting for RecordTV, I hope RecordTV can find a viable business model to sustain itself. No doubt, Mediacorp and/or xinmsn are not going to rest on their laurels and let RecordTV threaten their services.

Disclaimer: At the time of writing, I have no relations with Cooliris, RecordTV or Mediacorp, financially or materially or in any other manner.